A puppet a week

Some of you will already know about my proclivity for 365-style projects. Recently, while looking at knitting patterns for my toddler’s upcoming birthday, I ran across some really fantastic puppets by Anne Mende of Pumora (smart lady has an Etsy Shop, Rav page, and Craftsy shop; I love it when my favourite designers are easy to find!). These two fabulous designs caught my eye as MUST MAKE (immediate thought: “Do I have enough yarn in the right colour in my stash? Can I cast on right now? Will Matt be mad if I never finish that second mitten I’ve been promising?”): WALRUS! OF DOOOOOOM (doom not included) 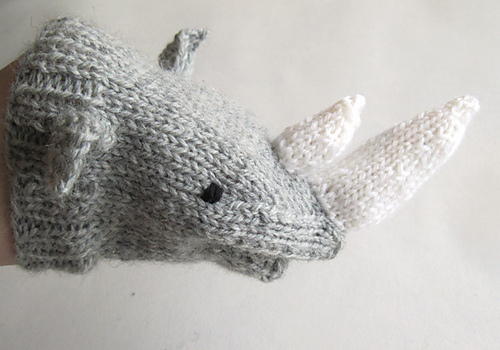 RHINO! Thanks to Diego and Dora, my child recognizes animals that, in general, do not make their home in snowy Canada. When it comes to our indiginous animals, we’re pretty limited by what we can see out of our window (mostly squirrels and the weirdos down the street). “Look, Mama, a Tree Frog! Oh, Mama, it’s a Kinkajou!” I was all like “No sweetie, Pikachu is not a real animal”. Thanks for making me look like an idiot in front of my 3-year old, Diego! However when I showed her some Canada Geese flying overhead, it was all “oh! I think those are Macaws!” and me smugly saying “Canada Geese, those are geese”. Boo-yah, got that one right.

I’m pretty sure I’ve got appropriate yarn in my stash, but yes, someone would be mad if I didn’t finish that second mitten. So these amazing knits will have to wait for a bit. So I was poking about to see what else Anne Mende has designed, and I came across what it possibly the most exciting (to me) 365-style project. A PUPPET A WEEK. A puppet. a week. A puppet! A WEEK. And then I scrolled down and there was a squid. A SQUID.

And then I saw this:

A lionfish! LIVINGSTON, IS THAT YOU?!?
Sadly it looks like she hasn’t made a new on in a few months, but I’m really hoping that she’ll pick this up again (and offer the patterns for sale). I wish she offered a subscription service; I’d happily hand her buckets of money if it meant she could brighten the internet with her awesomeness on a regular basis.
2 Comments
Knitting Adventures, Published Patterns

In which I am published and just a little bit excited about it.

So, my friends, I have had a knitting pattern published! And in Knitty, no less, a fact of which I am entirely, unrepentantly and completely excited (and not a little smug, too).  I present to you: Caaaarbs! An ode to all that is good and noodle-y…

You can find them on Ravelry here, if you’d like to add them to you queue or favourite them, or (gasp!) leave a comment! This pair has a very large set of pom poms, but you can make yours whatever size you like.

If you don’t get the joke yet, these mitts are inspired by the Flying Spaghetti Monster; an internet phenom since 2005. That’s right. I’m just THAT current with my cultural references.

Regardless, I am extremely pleased. Non-Knitters may not realize it, but being in Knitty is Very Much a Big Deal. Actually, way back when I started making and selling purses, at the very first craft show I ever did, Amy from Knitty showed up and spied my Yarn Pirate Bag. She featured it, and I sold more of them than I could ever have imagined. I really do credit her with helping to launch my sewing career! Seven years later, I’ve come full circle and actually have a real pattern published in the magazine (and photos of me wearing a colander on my head. I am shameless).

Once again I show you someone else’s work

I still don’t have anything to show for the hours I’ve been spending knitting over the last weeks, but I promise that at some point, there will be actual knitting content. Instead, I thought I’d share some of the nerdy media I’ve been consuming lately.

I’ve been listening to podcasts. Damn I love podcasts. I listen when I’m knitting, I listen when I’m sewing, cooking, and even when I’m falling asleep (which is great because then I listen to them again the next day).  I used to listen to a lot of audiobooks, but it’s always hard to find one with the winning combo of good story and good narrator. But I’ll get to that in a bit. Lately, I’ve been super enjoying these podcasts:

A semi-regular group of interesting and well-read folks chat about different nerdy things. Each episode has a theme that they follow; sometimes it’s a book, comics, movies, or tv shows. I just super adore these nerds. They’re thoughtful, well-spoken, frequently hilarious, and just really seem to have a good time recording. If you listen to a few episodes I highly recommend going back and listening to their fictional character drafts. I laughed so hard I gave myself hiccups and almost peed. For real. It would have been embarrassing  but luckily I was alone at the time. Also their epic Star Wars sessions are not to be missed.

Two awesome and sassy Canadian ladies talk about knitting, geekdom, and all things in between.  Funny and adorable, I actually had an opportunity to say hi to both of these fabulous gals which I was way too nervous to take.  That’s right. For some reason, my brain freaked out on me and froze it in a loop of “OMG OMG THEY ARE ON A PODCAST THAT MEANS THEY ARE FAMOUS” while my friends stood there and laughed at me. And they were right to do so. So that is the story about how I managed to not meet the awesome women of Knit 1 Geek 2. Also one time I met an awesome indie dyer, and then got all excited about it in K1G2’s forum on Rav, and then said indie dyer found the thread and was like “dude. duuuuuuuuuuuude”. It was hilarious, and embarrassing, but mostly hilarious. And if you don’t knit, that last paragraph was gobbledegook (and way more about me being a flailing nerd than anything else. Whatever. Listen to the damn podcast, you’ll love it). Skeptics with a K

Three dudes sit around and talk in English accents and say things like “take the piss” and “blimey”. So……. basically the best, ever.

Also the host is a super fan of Doctor Who. So you know. Accents, occasional cleverness, and sometimes Doctor Who. It’s like someone peeked at my Christmas list!

In all seriousness though, while I enjoy more serious science and skepticism shows, I think Skeptics with a K is my favourite Skeptical podcast. There’s something really enjoyable about listening to three friends who are all genuinely likeable chat with each other, and there is just enough structure to the show to keep it from running off the tracks while still keeping the momentum of the conversations going.

So it looks like my favourite podcasts all have one thing in common: a group of friends talking about something they’re all really interested in, that I am also interested in. What did we do before the internet? How did we find our people? Where were all these nerds when I was thirteen and no one in my class had seen Star Wars let alone cared about what Timothy Zahn book was coming out next (I should perhaps mention that I was thirteen in 1994, so it actually wasn’t entirely unreasonable that no one but me in my grade 7 class cared about a Sci Fi movie that had been released 15 years earlier).

I have also been listening to some audio books again, hooray! I forgot how much I missed these.

I can’t even read a discworld novel anymore. Seriously, Stephen Briggs is just that darn good at bringing this world to life. I can ONLY listen to them. You could play me a clip of any part of the book, and I’d know exactly what character was speaking. Terry Pratchett audio books are one of the greatest things about the invention of sound recording.

I actually have audio books to thanks for my discworld fandom. I picked up Going Postal from the library a few years back, not realizing that it was the 33rd novel in the series. Luckily, you don’t really need to read all of them in order to understand what is going on. In fact, I present to you this handy guide for reading order in the discworldian saga.

Whenever someone asks what this books series all about, I’m always like “well, it’s fantasy, but it’s funny, and the later ones are the funniest, but they live on this flat planet, see, that rides on the backs of 4 giant elephants, which in turn ride on the back of a giant space turtle…. but really that part isn’t important”. I am terrible at explaining things. 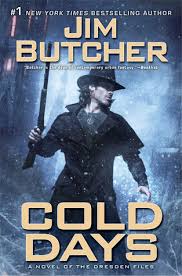 And finally, I am currently listening to Cold Days by Jim Butcher.

Also the main character, Harry Dresden, is a wizard, for hire. Who makes wise-cracks and references amazing things like Star Wars. And Harry Potter.

Also, and I’m going to go ahead and warn you that this contain spoilers.

One time he did this.

So, you know. It’s pretty great.

Well, that’s what I’ve been up to nerd-wise lately. Also my brother just e-mailed me to let me know that Netflix has Star Terk: TNG in its ENTIRETY so I guess I know what I’m doing for the next month, too.